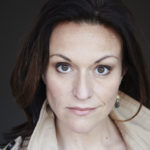 Critically acclaimed soprano Christine Buffle is one of the most compelling artists of her generation.

She made her debut at the prestigious Opernhaus Zurich as a member of the International Opera Studio before starting her international career with the company as the Queen of the Night. Further engagements have taken her to the Grand Théâtre de Genève, Scottish Opera, Prinzregententheater München, Opéra du Rhin Strasbourg, Opéra de Lausanne, Teatro La Fenice, Komische Oper Berlin,Teatro Arriaga Bilbao, Opera North, Salzburger Festspiele, the Edinburgh Festival, Lucerne Festival and the Staatstheater am Gärtnerplatz where she was lauded for her sparkling interpretation of Rosalinde.

During her tenure as principal soloist at the Landestheater in Innsbruck, Christine won the prestigious Eberhardt Waechter prize for her interpretation of Donna Anna in Mozart’s Don Giovanni and sang many of the important roles in her fach including Konstanze (Die Entführung aus dem Serail), Violetta Valery (La Traviata), Gilda (Rigoletto), Nedda (I Pagliacci), Juliette (Roméo et Juliette), Antonia (Les Contes d’Hoffmann), Governess (Turn of the Screw), Elettra (Idomeneo), Alice Ford (Falstaff), and Blanche in Dialogues des Carmélites as well as rapidly becoming the go-to operetta diva of the house. During her last season as a company member she  performed the Vixen in Janaceks Cunning Little Vixen (a role she also recorded with Kent Nagano and the Berliner Symphonieorchester for BBC/Opus Arte), and triumphed as Leila in Bizet’s Pearl Fishers.

As a regular guest of Théâtre du Chatelet in Paris, Christine won unanimous public and critical acclaim there for her portrayals of the Baker’s Wife in Stephen Sondheim’s “Into the Woods” , of Anna Leonowens in Rogers&Hammerstein’s “The King and I” opposite French film star Lambert Wilson’s King, and most recently as Lili Vanessi/Kate in Cole Porter’s “Kiss me Kate”, a role she also starred in during the 16/17 season at the Grand Théâtre du Luxembourg.

Born in Exeter and raised in Geneva, Christine Buffle’s education reflects her Anglo/Swiss ancestry: fluent in four languages, she received her musical training at the Geneva Conservatory and the Guildhall School of Music & Drama in London.